Our team supports Felicity and her family in their fight against this tumor. Every purchase and every donation that you give to Hogs For The Cause also supports Felicity and all the other families out there dealing with this terrible illness. We THANK YOU for your support and for helping FELICITY continue the fight. 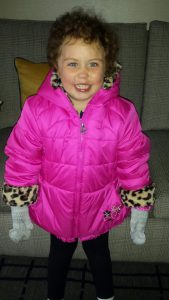 In September 2016, we learned that our sweet and previously very active 3-year-old, Felicity, had a brain tumor that had pushed aside her brain stem and was entangled with her cranial nerves.  The tumor caused her to have difficulty walking, talking, and seeing out of her right eye.

Felicity had an emergency 13 hour surgery to remove about 90% of the tumor.  We learned that she had a grade 2 meningioma, a very rare condition in children.

Though we hoped the tumor would be slow growing, an MRI performed in mid-February 2017 showed that the remaining tumor was much more aggressive than we had hoped, having already grown 30-40% since a scan in November. It was clear she would need another surgery only 6 months after her first one, to attempt to remove all of the tumor.

After much research and consultations with several hospitals, we have decided to travel to Boston Children’s Hospital for this next surgery (scheduled for March 30th) and further treatment.

Learn more about Felicity’s story and how to help.